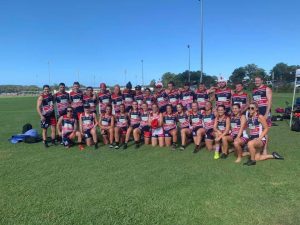 For a player to qualify, they MUST have been registered in the Winter or Spring 2021 season & have played at least 7 competition games in a completed season. If you did not register in either of the seasons, then you do not qualify.

Coaches must be from the area, cannot play in another area & coach a different area.

If players have the State Cup shorts or tights then they will not be required to order. Teams that gain promotion to State Cup will be able to play in the themed top or if they wish they have the choice to order the State Cup playing top.

Sydney Oztag will then run a week-to-week Sydney Cup competition for the development teams & others that wish to participate.

Please note: if your team enters in both Sydney Cup tournaments, total registration will be $100 per player for the both, if they only enter in one it will be $60 per player.

If you would like to enter a team for the Sydney Cup Development Tournament, please complete the following EOI

To apply for a coaching position, please Contact Sivasaran Sooriakumar on 0433 686 140.

To apply for a Playing position, please complete the EOI

Sponsors that are acquired by the teams will have packages available to choose from which will then determine their logo placement on playing uniform.